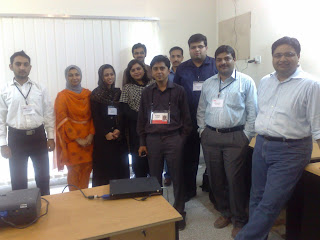 As such event was organized in Islamabad and attended by BrightSpyre Team. Mr. Faisal said “It was difficult to decide which TED theme and talk to choose to show them in 1 hour session. So I decided to ask it from attendees to make my choice easier.”

A few arrangements done for the talk include a projector ( a bit bigger screen than Ana Gabela Hawaii TEDx) , badges for everyone (not as sophisticated as TED badges) and desi local food. The team members from HR, Graphics and admin departments made arrangements for this wonderful talk.

It is impossible to create the TED atmosphere any where else in the world but still TEDx Islamabad attendees were looking thrilled and inspired after one hour.