Boots on the Grounds and Brains on the Issues 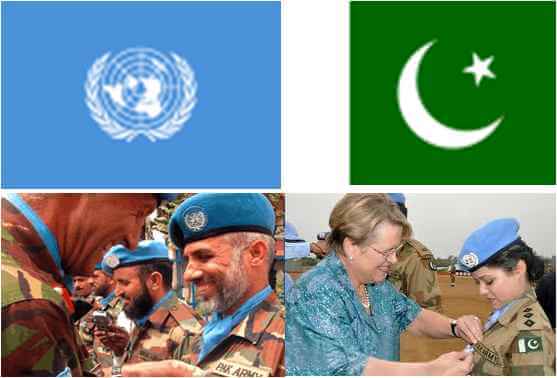 “I have personally met brave Pakistani men and women who served proudly in some of our toughest missions around the world. They are truly an inspiration. Pakistan provides essential “boots on the ground” and also “Brains on the issues”. As a Secretary-General, I can count on Pakistan to help our missions. The United Nations is deeply grateful for their contributions. Pakistan’s historic commitments to peacekeeping have taken a heavy toll. 132 Pakistanis have lost their lives while serving the UN. We owe them a great debt of gratitude.”

Recently, I went through an ad post for course registration on United Nations Peacekeeping Training on Protection of Civilians. Being a scholar of International Relations this course seemed interesting to me, I hurriedly did the registration and luckily got selected for the course on first come first serve bases as there were limited seats available for the civilians. I would say it’s a great opportunity that one should avail if anyone gets a chance of it.  Developing Protection of Civilians training courses targeted at personnel about to deploy, as well as those already working in peacekeeping operations. This course is not only designed for military personnel but it is also open to professionals from people police, civil armed forces, academia, students, members of the UN agencies/programs and INGOs.

Participants of the United Nations Peacekeeping Course on Protection of Civilians attended the training at NUST University Islamabad. I can say with full confidence that it was one of the best experiences of my life. I got a chance to interact, learn, and enlighten from the knowledge and experiences of Armies of United Kingdom (2), Kazakhstan (2), Sri Lanka (2), Nigeria (2), Philippines, Jordan, Egypt and last but not the least 4 army personnel from Pakistan. Not only this interaction, ideas and knowledge sharing from civilian students of NUST, NUML and NDU, but Islamabad is also worth mentioning. I would say it was a class with a whole package of diversity, in case of religion, ethnicity, color, race, gender, nationality and much more. But we were all one in the class where we all came to get training of peacekeeping for Protection of Civilians because we all had one goal to make this world a peaceful place to live in while setting aside all of our difference.

Peacekeeping by the United Nations is a role held by the Department of Peacekeeping Operations as a unique and dynamic instrument developed by the organization as a way to help countries torn by conflict to create the conditions for lasting peace. Pakistan’s journey with UN Peacekeeping operations began in 1960 when it deployed its first ever contingent in United Nations Operations in Congo (ONUC). Over the past 50 years, Pakistan has been the most significant and consistent contributor to the UN Peacekeeping around the World. Pakistan Army has the third most number of soldiers in UN Peacekeeping Missions.  In 2007, Brig. Bajwa (Now General Qamar Javed Bajwa) commanded the Pakistan Armed Forces – Africa command, attached to the UN peacekeeping mission MONUSCO, in Congo.

There are total 14 United Nations Peacekeeping Missions currently led by the Department of Peacekeeping Operations and one of them is UNMOGIP (United Nations Military Observer Group In India And Pakistan) ) which is Observing the ceasefire in Jammu and Kashmir. Army, Police and Civilians who are going to deploy in one of those conflicting areas where the United Nations is working on its peacekeeping mission need to get through three phases of Peacekeeping training.

The course was of 2 weeks and total class of 27 students got training from Retired Military personnel who had served at different countries as a peacekeepers. NUST Center for International Peace and Stability faculty enriched the participants from their real life experiences about Peacekeeping rules, principles, phases, tiers, stages and much more. The faculty also educated about their involvements deployment at United Nations peacekeeping missions in Ivory Coast, Congo, Central African Republic, etc.

The forerunner of the United Nations, established on October 24, 1945, was the League of Nations, an organization conceived in similar circumstances during the 1st World War, and established in 1919 under the Treaty of Versailles “to promote international cooperation and to achieve peace and security.” The League of Nations ceased its activities after failing to prevent the Second World War.

Not only there were lectures on various topics related to the Protection of Civilians and Peacekeeping but also one whole week was dedicated towards Situation Based Exercises and Presentations. Participants of the training were distributed into three syndicates and each syndicate has given a scenario in which group members work together to highlight the problems related to a situation and make a plan to address those problems. Each syndicate member was assigned with a role like Sector Commander, Chief of Political Affairs; Chief of Civil Affairs, Child Protection Advisor etc. and he/she gets to a chance to present a plan on slides to address the problems in the respective scenario. Besides this the three syndicates also presented presentations on three of the UN Missions i.e. MINUSCA in Central African Republic, MONUSCO in Democratic Republic of the Congo and UNMISS  in South Sudan while describing the country profile, Geography, Genesis of the conflict an current situation, UN peacekeeping mission , mandate, Security Council Resolution, current mandate and way forward.

United Nations  Peacekeeping department also work with other agencies, INGO’s, NGO’s and Host country force and Police who are working for protection of Civilians, for example UNHCR, UNICEF, UNWOMEN, UNAIDS, UNOCHA, OCHR, ICRC, Save the children etc. these all agencies work together for the protection of Civilians, Children, Women, Peace and Security and Conflict-related Sexual violence.

I would add that it’s easy to learn and get knowledge on the subject from online platforms like Google, YouTube and UN websites but it’s a totally different experience when you learn, interact and communicate from people with real-life experiences along people having different backgrounds and nationality. When one gets a chance to communicate with diverse people, he/she learn their culture, traditions, practices their norms but along all these difference the basic goal remains the same which is peacebuilding, peacekeeping and protection of Civilians.

About Writer:
Miss. Nudrat Wajiha Janjua is M.Phil. International Relations scholar from National Defence University, Islamabad. She is proficient on the topic of China Pakistan Economic Corridor and Pakistan China Relations. You can reach her on [email protected] .